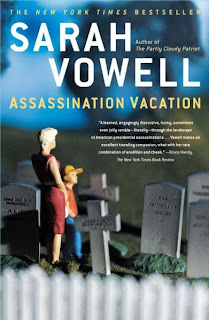 Just when you thought the nerdy fun couldn’t get any more nerdy or fun...you’d be wrong. Assassination Vacation (the end of our trip down Vowell lane) focuses her obsession and wit on the first three American Presidents to be assassinated: Lincoln, Garfield, and McKinley.

Once again she travels around the country looking at graves, childhood homesteads, jail cells, and historical markers. She drags friends, colleagues, and her infinitely patient sister and nephew along with her - the bonus of this for us is that we get their opinions as well as hers, which is always colorful and amusing.

Ok, so you’re thinking “everyone knows that Lincoln was shot by Boothe at the theatre” and “wasn’t Garfield only in office for a minute and a half?” and “McKinley? Really? WHY DO WE CARE?” And you’d be mainly right. What makes it all so interesting is that Vowell doesn’t just cover the event itself - she delves into the political climate surrounding it and the lives of both assassinator and assassinated. For example: the Republican party started to become the party we know today around the time of Garfield’s candidacy - much tantrum throwing and manipulation and backfiring of plans.

We learn the Lincoln’s poor son (Robert) is in the vicinity for each assassination, even though he’s not involved with any of them...he’s just a good luck charm for the man with the gun. We learn about the odd life and times of Charles Guiteau (Garfield’s assassin) and are taken on a tangent that is too good for me to spoil here. Furthermore - there are interesting tidbits about how Roosevelt actually made it into power and laws that were enacted as reactions to the assassinations that are still in effect today.

All of this fairly text-book like information is delivered in Vowell’s distinct voice. Wry humor and insight coupled with vigorous research and a willingness to divulge her own character quirks make every character (satellite or otherwise) seem more real to even the most disengaged reader. She also draws very nice parallels between what happened then and what was happening at the time of writing (03-04) - searing commentary cloaked in historical anecdotes. It’s downright delightful.

Of course, it’s Sarah Vowell, could it be anything other than delightful? I’m actually a little sad I’m at the end of her published works. (Ok, technically there’s one more, but my library doesn’t have it. I’ll keep my eye out at the bookstores, though. Not to worry.)

And I’ll leave you with her interview with Jon Stewart when this book released. It’ll give you a nice little taste of what’s in store.