What's Going on in There? by Lise Eliot, Ph.D. 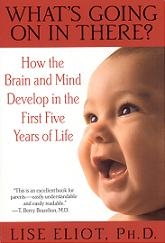 This bad boy took me MONTHS to read. Seriously. Because it is dense and awesome. That's subtitle doesn't lie: conception to kindergarten in 460 pages. It's not set up chronologically, though, which would have been mind-boggling. More mind-boggling, that is. Instead, Eliot had structured her text based on the parts of the brain; ie: language, vision, fine and gross motor skills. It is comprehensive (I assume) and accessible. Yes, it is dense, but so is your brain and so is what goes on in there (haha), but it doesn't read like stereo instructions and the language is suitable for those of us who watch doctors on TV but never had any desire to actually be one.

I learned SO MUCH reading this. I feel much smarter now.

And because I enjoyed it so much the last time we did this, I'm going to open to a random page or two and share some nuggets of wisdom with you:

"...researchers suspect speed as a primary difference separating 'brighter' from 'duller' individuals. Though infants in general process information many times more slowly than adults, it seems that some babies are already a little faster than others, and that this difference persists all the way to adulthood." (p. 419)

"The ability to taste begins in utero...Matthews first taste buds emerged just eight weeks after his conception. By thirteen weeks, taste buds had formed throughout his mouth, and they were already communicating with their invading nerves." (p. 174)


The last chapter is entitled "How to Raise a Smarter Child" - but if you flip straight to it you miss the fact that the answer to the question is actually spread throughout the book. Yes, Nature plays a key role in just how smart you can be, but the environment has an equal amount of influence. And the knowledge that Eliot imparts enhances ones ability to parent wholly...if only because finally you can understand what's actually going on in there (at least, a little bit.)
Posted by Emily at 15:36