She Looks Just Like You: A Memoir of (nonbiological lesbian) Motherhood by Amie Klempnauer Miller 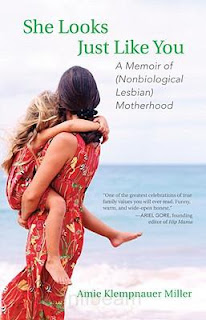 I firmly believe that anyone who thinks they should have a say - or that there should be legislation defining - what makes a family needs to read this book. Because Miller is honest and moving and most definitely a mother. And I say this as a straight, monogamous mother.

I have to admit, though, that I grabbed it off the library end cap on a whim. I'm on a Mommy-Memoir kick (in case you haven't noticed) and so it appealed to me. I hesitated, though when I saw that Amie is a lesbian. Not because I was turned off by the concept, but because I wasn't sure if I could relate. But I did. I can. I think that any human who has tried, succeeded, considered, is considering,  and/or may one day bring another human into their life will relate.

In fact - my only issue with the whole thing was the few times when she said "because I am a lesbian, I am ________." And I thought "no, honey, because you are a woman/human/parent you are...."  Not that lesbians aren't, but they haven't cornered the market.

I was moved to tears so many times. I'll admit it. There might have been wine involved, but there were definitely tears. Tears when the pregnancy took. Tears when their daughter was born. Tears and tears and more tears. She overcame huge hurdles - and she shares them with such honesty and fearlessness that it's no wonder she is in her third decade with her wife.

There is no way to avoid the politics of the situation while reading. I fall firmly in favor of not needing the legislation that is constantly in trouble or about to be voted on. Why? Because the LGBT community is covered by the 14th amendment.

In a totally cute (and enlightening) offshoot: the author interviews her daughter. Read it here.
Posted by Emily at 18:31

I just reviewed this book and linked your post to mine. I'm glad you enjoyed the book as I did.

Thanks! I look forward to reading your review!